So Why Keaton, Part 2: Buster In Film

Buster Keaton became known as The Great Stone Face since he never smiled in films. If you believe that statement then you've never viewed Buster's early work with Comique. 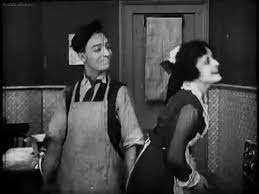 Buster with Josephine Stevens in The Rough House, 1917

He smiles, laughs, and even cries. There are later smiles too. Le Roi des Champs-Elysees is the brightest example, and highly tuned fans have picked up on smiles in other films that snuck through editing. I never bought into "The Great Stone Face" persona even though the title does have a nice ring to it. Buster Keaton was an excellent actor with or without a smile. His eyes, his mouth, his body were used in subtle and not so subtle movements to convey emotion and advance a story. The audience knows what he's thinking sans any dialogue.

Great actors have a very noticeable presence in every scene no matter the screen time. This is usually called "stealing" the scene or show. I feel it is more a mastering of their profession. When a master is at work, in any field, it's hard to look away and an honor to watch. Buster became a scene stealer in his very first film. He had over 15 years of vaudeville behind him where, I imagine, he stole the show too. It's hard not to watch him. 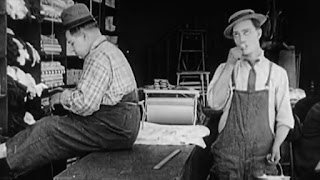 Buster with Roscoe "Fatty" Arbuckle in The Butcher Boy, 1917 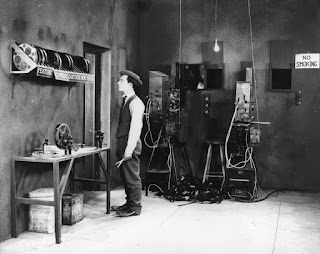 Keaton's career, especially his early work, is the major cause of my Keatonholism.